Earlier this year I returned home after a girl’s weekend with Sue and Lennie with 2 of these.

While visiting West End Salvage in Des Moines (you may have heard of them from their short run on one of the cable network Home improvement/turn junk into cool stuff shows). I had my eye on a stain glass window and Lennie said her sister who was downsizing and had moved into an assisted living facility had a couple of stained glass windows she was selling and they either had an N or an H on them. I interpreted this to mean that if it was an N, it was meant to be and if H, well, Hmmmmm. The even more exciting thing for me was that her sister got them from her son who took them out of a house in Kansas City when he remodeled. They had to come full circle and return to Kansas City!

Since then, I’ve several times pulled them out of their safe hiding place in the basement to figure out what to do with them. Finally, He and I figured it out…my ideas….his handiwork ability. 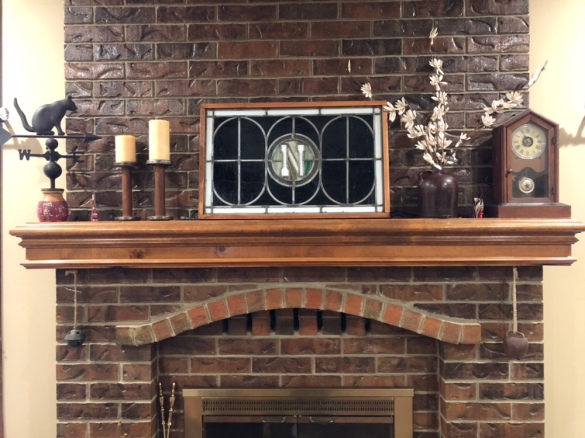 A frame to hold button lights….and a beautiful glow on my mantle.

3 thoughts on “The stained glass window”