It has taken a long time, but Ninasusan is now part of a neighborhood again and she is very happy.  I have a feeling I’m going to bloom where I’m now planted.  Robbien – married to Dave – to our north loves yellow and she loves stuff – so we are going to get along beautifully…ironically theyhave a grandson named Jaxon who was born 3 days after our Jaxon…anyway…Dave and Robbien are doing something to the inside of their garage.  After a visit to their house earlier this week, I know they are very crafty…..They may just be hanging sheetrock – can’t tell driving by…but I’m quite curious 😉

He sprinkled grass seed this morning before we left for the shop…it rained today so hopefully it will take.  He asked me to jump out of the truck when we got home to see if any of it had sprouted…I know he will be sitting in a lawn chair every morning drinking his coffee watching it grow.  Whoever said retirement could be boring!

Stormy and rainy today…I’m not as concerned about the weather down here even though it is closer to tornado alley as well as the bible belt…always wondered if those two things went together…we have the National Weather Service nearly in our backyard and I assume they wouldn’t build it here if there was any possibility of bad weather, right? 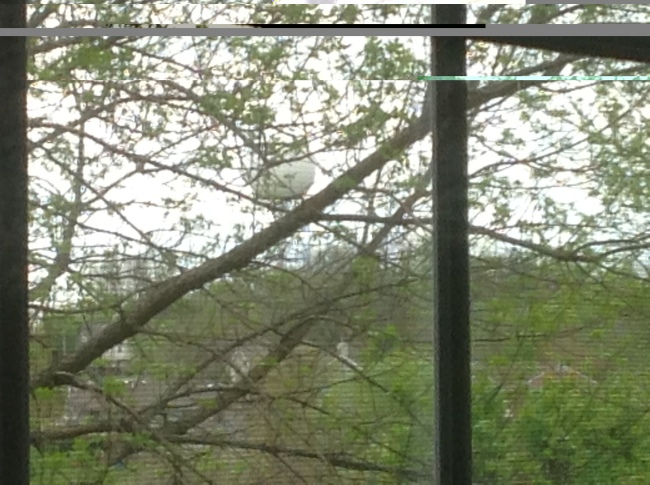 Won’t be long until we won’t be able to see the NWS dome for the trees.

When I was small, Easter meant time to buy a spring coat…an easter hat…an easter dress and mom would take me to “her” church.  She was quasi religious.  Lots of lip service and showing up at church on Easter Sunday was imperative.  Only to find out when I was a teenager and attended my own church regularly that the folks who showed up only on Easter Sunday and Christmas eve were not religious at all…oh, how nasty christians can be.  I have a picture of me at about 2 or 3 holding up my little white purse wearing my pink frilly dress and my flowered head band hat…but I couldn’t find it quickly this morning…but I do have this one. 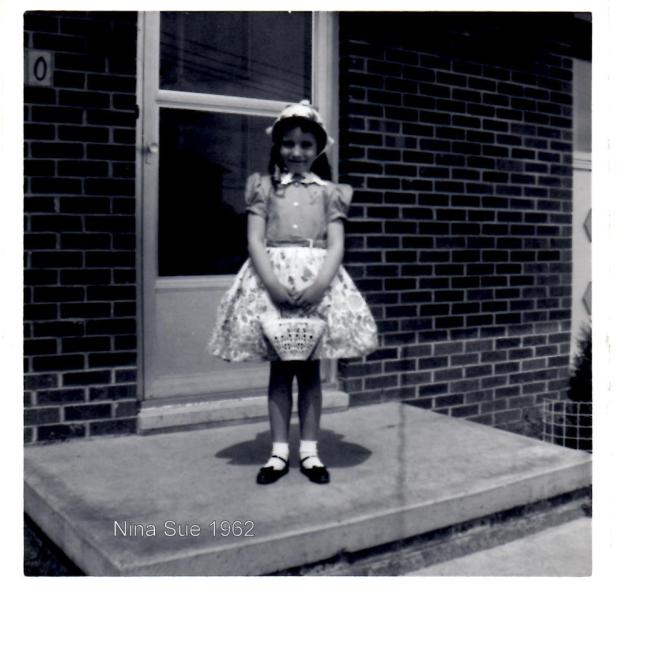 I was 6….and I think there is another picture floating around of Lennie Rae (my childhood sister) and me on the same day.

Easter in my teens was a big deal…Rising Sun Church of Christ…sunrise breakfast  and church where we sang He has risen at the top of our lungs.  I didn’t buy a new hat, a new dress or a new coat or purse.

Then I moved away from Des Moines – dabbled in church – new church traditions – sang in the choir – Easter cantata that wasn’t done on Easter morning but the week before – never understood that.  The big blow to my beloved Sundays was my job…with 1 1/2 weekends off a month, going to Sunday church with any regularity was impossible.  If I wasn’t there for my shift, someone had to cover for me.  It got too complicated.

Now I’ve moved to another state – no traditions yet – didn’t even realize it was Good Friday and knew Easter was coming because I was seeing lillys in the stores.

But this morning…I knew it was Easter because I was reminded by all of my friends with the easter bunny pictures, the pictures of the crucifix and well wishes…but the one that made me actually sit down and type this blog was a post by Deb…it was the Easter Song by Second Chapter of Acts…from the 70’s – The picture looked like the  “With Footnotes” album…it brought back so many memories.  Happy Easter everyone!

He and I were pleased to find the Crossfire Recreation Center on Truman Road in Independence.  I had been searching for indoor shooting ranges so we could get a little practice in…the one recommended to us is closed on Tuesday…I was irritated.  But really glad to have found this one.  It was fun.  This is one of those things we like to do together.  Last week, he bought me a Keltec 9 mm while we were in Branson and I was excited to shoot it.  Also took along my little Beretta …my dad bought it many, many years ago and used to keep it in his dresser drawer in their bedroom.  When I was 8 or 9 years old, I came home from school one day, entered the garage and found the inside door to the house ajar.  I checked the upstairs of the house, got the Beretta out of my dad’s drawer, cocked it and proceeded to the basement to be sure I was alone in the house.  I’m positive that had someone been in there, I would have blown them away or whatever that little 22 short could accomplish.  I look back on it now and thank my dad for having the foresight to teach me how to load and fire that little gun…I would like to think that he knew I was using it today and thinking about him.  It was fun.  Had a little difficulty seeing the forward center sight on it, but I hit the target many more times than I missed.  It feels good in my hand and feels like an extension of my arm.  The Keltec…not so much.  I need another trip to the firing range to feel confident.  I ordered a pistol packing mama purse last week so I can safely carry the weapon with me – especially on the days I work in the store. 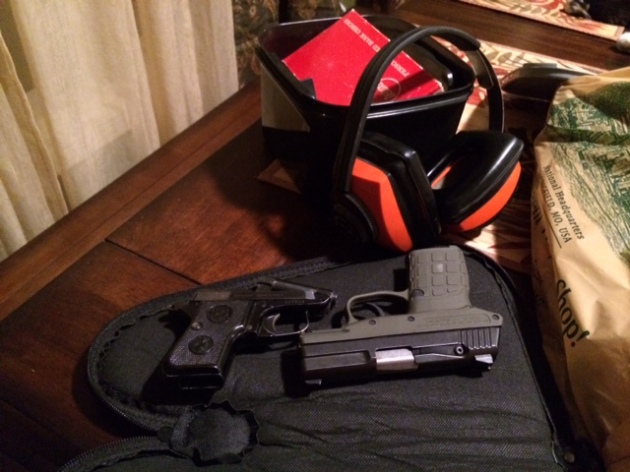 We hit Bass Pro, Starbucks, drove up and down gravel roads trying to find the access to Harrisonville Lake…we did find one sign advising us that it was a federal crime to pass the gate down to the lake.  My little brain is finding it very suspicious that this huge lake lies in the middle of Missouri and there is no way to get down to it…I told him that perhaps it is used by the Missouri Navy.

Bought a jogging stroller for Jax.  We aren’t going to jog but Jenny thought it would work better than a standard stroller on the gravel around the pond.  After he got it put together, we wanted to try it out.  He thought we should go ahead and strap a cat in and go for a walk *rolling eyes. 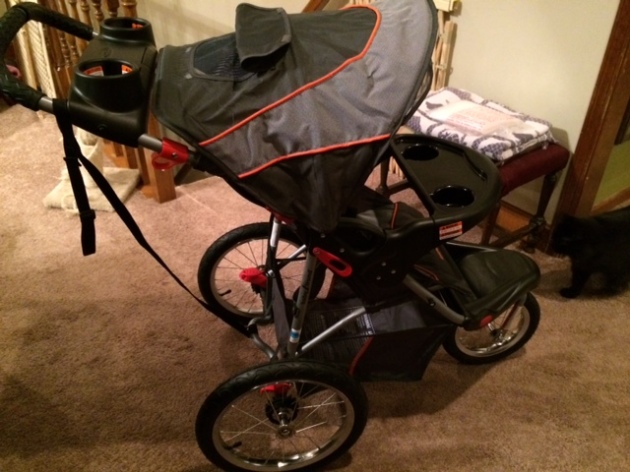 Hit TNT BBQ in Pleasant Hill for supper.  One of those places that looks like a hole in the wall but serves great food….according to their information, they’ve been in business for 30 years.  We are home now..each of us in the computer room on our own desk top computers…it’s kind of nice.  What would really be nice is if he would attach the beaded fan pull to the ceiling fan so I could click it fast and slow and not have to ask him to do it every time…but he maintains he needs a ladder to do it. 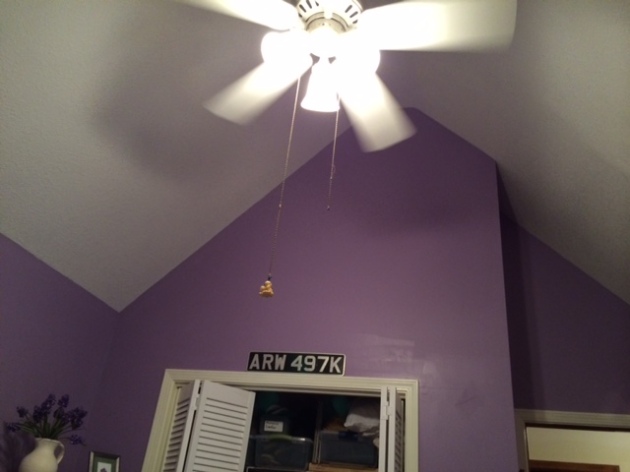 Looking at the big picture…this week has just been crap.  I got his head cold…and seriously..it hit me a lot harder than it did him.  This is day number  6 and I’m still sneezing and wheezing.  Day number 5 last week, he was well enough for me to take him for a car ride *gut laugh.  I thought something this week that has never crossed my mind before…you know…you kind of get used to the taste of Night and dayquil and it really doesn’t taste that bad….need I say more about the state of my mind!

…and the big blow was the big Younkers store in Des Moines burned.  Some of the visual reminders on this You Tube video brought tears to my eyes.

This was devastating to lots of us in my generation.  This is where we shopped on Saturdays with our mothers.  The Younkers Tea Room was a beautiful, ornate room where you dressed up in dresses and hats and little white gloves and had dinner..sometimes with a fashion show on the stage.  I had told my family about the many outings with my Aunt Frances and this was a big one.  I would be dressed in my finest with little white gloves that stopped at the wrist and we would head downtown Des Moines.  I believe the last time I was in the Younkers flagship building was around 1978 when mom and I were shopping for my wedding dress.  The building was under renovation – it was a beautiful, old, classy building.  It would have made a beautiful repurposed building…so sad.

Today is our day off together.  Tomorrow peanut comes and Dave and my old girl, Margena are coming for the weekend.  Things are looking up!