It seems this year went sooo fast.  As years go, it was not a particularly good year…but it could have been much worse, I guess.  What I mainly remember of the first few months was the ups and downs with mom and Aunt Frances..almost constant chaos and indecision..I felt  like I was on the end of a yoyo…then the trips to Mayo Clinic with him.  His health had all of us nervous but I never lost hope in Mayo Clinic’s reputation.  Several trips and thousands of dollars of tests and I think I know we are headed for blue skys…aka January of 2010…he scheduled for an adrenalectomy which will help a multitude of issues.

We only got one fishing trip in this summer just because all of the above – the vacation we had planned for August fell thru because mom died – and we began that arduous task of cleaning out her house.  Also in August, Ryan and Jenny announced their plans to move to Kansas City…seems that all of the high stressors one can have in their life were on the front burner of our lives.  A couple of months later, Aunt Frances finally gives it up..probably because she couldn’t live without her only sister of 91 years…lots of turmoil with her passing as I found out she was very, very angry with me and blamed me for sending mom to hospice.  She was in the hospital for 2 weeks before she would let the doctor call and let me know.  I felt at peace with her death as I did moms because I felt death bed connections…I am quite surprised that I have enduring feelings of sadness…I actually thought I would feel so much relief that I would be able to move on quickly…but that hasn’t been the case..perhaps I’m validating the years of knowing down deep inside that I was a normal person and they were not!

The last months of the year have been bittersweet…we haven’t had much downtime.  We are remodling mom’s house so we can move into it.  It is a lot of physical work for him and lots of mental work for me.  I’ve been able to start an ebay business and have a booth at Pappy’s Antique Mall…this is the bright spot of the year for me.  I have a lot of fun and make a little money…I really planned to use it to help buy some new furniture for the house…but I have also gotten a little more ebay savvy and having fun adding to my dishes collections…These are my collections, but I think he enjoys the beauty of these old dishes..he loves antiquing just as much as I do.

Thru the funerals and holidays, we got to see the kids a lot.  In fact, Kate and Luke just left here to start their 2010 adventures.  Luke will be flying back to Ohio today and Kate begins her adventure student teaching at the Kansas School for the deaf in Olathe, KS.  She and Jenny will be able to spend lots of weekends together for the next 4 months and we will get to see them more often with both in the same place and only 3 1/2 hours from home.

The best part of 2009 were friends and family.  We have never felt alone thru our trials and tribulations ..friends/family have always been there for us…they have sweated with us, worked with us, cried with us and laughed with us.  My cup runneth over!

One last negative thought …I really need to bitch about the December weather..it has sucked…

I’m fried…but it is a good fried, I think.  For the first time in my adult life, I’m not dreading anything about Christmas.  It’s going to be a tough day because mom and Aunt Frances are gone…Katy says that is big…huge…Grandma sat in the corner sweet and oblivious and grinning trying to get Daisy on her lap…and Aunt Frances talked non stop…they are going to be missed…but I also don’t have to get them in the car, get them out of the car, get them settled, get their dishes ready, get them to the bathroom, cringe in case someone said something that might be interpreted wrong by them.  Why I took that job on, I have no idea…then do the whole thing over to get them home.  I’ll never forget the Christmas eve that we took them home and mom’s sewer had backed up in her basement…He spent many hours hauling “stuff” out of the basement…then the girls couldn’t flush so they spent the night at our house…one in the recliner and one on the sofa because there is NO WAY we could have gotten them up the stairs into a bed…I think that was with 3 dogs and only 1 cat…I laugh to think what it would be like now with 3 dogs and 5 cats…

Christmas was always mom’s holiday..she did it up big…she spent a lot of money, bought a lot of gifts, always had dinner and Christmas at her house…there was no other way.  She apologized for that one year and said she felt bad that she had never let me start having Christmas at my house to start a tradition with my kids.  We had a tradition, we went to grandma and grandpa’s house…When his family was all still together, we would go to his mother’s house in the morning and for dinner and then my family in the afternoon.  His mother would never even think of budging on having Christmas…even the year that his sister couldn’t make it from South Dakota until afternoon…had to have presents and dinner at noon…there was no room for change!!  His mother is a whole other Oprah show…

Christmas has always been very important to me…but it is going to be different this year…not bad just different..I’ve always had to bend in the wind or I would have been flattened a long time ago…so bring it on.

Merry Christmas or just Happy Holidays for those of you who prefer that verbage.

It’s been a great weekend…depending on fantasy football tomorrow, it might be an almost perfect weekend.  Friday night, Susie came for a visit, girltalk, wine, blue cheese on crackers with strawberry jam..mmmm  I picked Deb up this afternoon for our 2nd annual Jim McDonough Christmas concert at Hoyt Sherman.  He is an amazing musician and he is Iowa bread and born..can’t beat that.  After dinner at Noah’s Ark and good conversation, we went to Brett and Christa’s house…the grandkids and Alyssa were there and that was very fun.  G’ma and G’pa were exhausted which made me snicker…it was a wonderful evening.

Back in the saddle Sunday night…but only for 4 so I can do it.

Have to get some ebay stuff packaged and ready to mail.

From the comments I received on yesterday’s blog about my intense curiosity…I was pleased to find out that there are a lot of us crazies walking the street.  When you are face to face talking to someone, you have no idea what they are thinking about..in that little curious recess of their mind…It tickles me.  Kissed by a dog hit on another one of my things that I figured I was the only one..she drives around and sees people and wonders about them..what do they do, etc.  That is one of the things I do when I travel..wow…there are people in that house that have the same problems I do (in general) what is going on in there right now…interesting.

My other ebay cheerleader (Christa) told me that people buy the wierdest stuff and something you might think is ugly or you think no one would possibly want it, will sell easily.  She even pointed out a couple of things that I was about to inherit 🙂 …on the flipside..I have a beautiful blue bird that has been thru 2 auctions and I haven’t even gotten a “watching” flag on.  When I was photographing it for ebay, I actually thought to myself..wow..this is really pretty, I wonder if I should keep it..but I just don’t like birds that well.  Here it is. 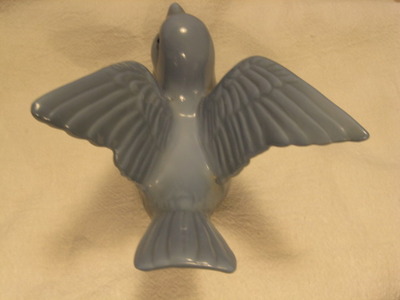 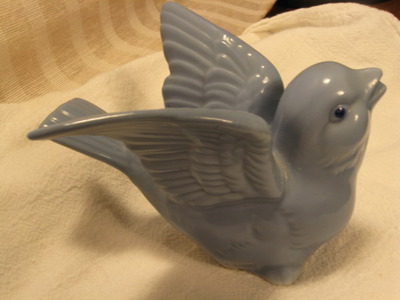 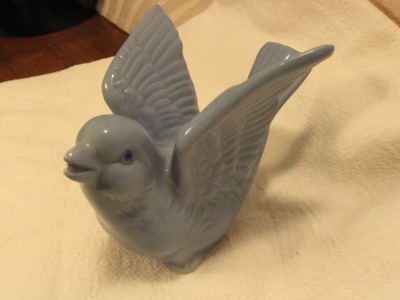 It is old..it has the label INARCO Japan on it, it is adorable but no one wants it…but someone wants 25 wooden spools of thread?  There is absolutely no rhyme or reason to this stuff.

Birds…there have been times in my life when I’ve wanted to be locked in a room with someone so I could beat the holy crap out of them..I’m mostly talking about murderers and sex offenders but there have been some regular people too…but the thought of being locked in a room with a little flying bird that could peck me to death makes me sweat.  Several years ago, we took the kids to Disneyworld and Universal Studios,  we thought it would be fun to see a 3D movie..glasses and all…well they were showing the old
Bird movie in 3D…I was laying in my seat screaming…the nightmare had become a reality..

For starters…I’ve found ebay…there are few things (at this age) quite so satisfying as seeing the stuff you are ready to give up be exchanged for cash.   I tend to have some addiction problems with stuff…kind of like a dog with a bone with lots of roast beef still attached…you can’t get it away from me.

Someone told me (Deb) not to throw away my wooden thread spools because someone will buy them..WHO IS GONNA BY THREAD SPOOLS. Well, I put 25 of them out there and I got more for them then I got for a 3 antique bowl set.

I was sitting in the bank manager’s office today doing some..banking…I was curious about the layout of her office compared to the tellers and wanted to turn around and check out her vantage point..and then I wondered if she has a little bank alarm button under her desk..and then I wondered if she frequently looks out the window that is partially “blinded” to see who/what is coming in..like you can tell a criminal from the rest of the public any more..and then I wondered if she was ever afraid to sit in the bank..I mean bank robberys are quite popular these days.  I wanted to ask her all of those questions..but I was afraid she would push the bank alarm button under her desk and pull out her 9 mm smith and wesson and blow my head off…

When I left the bank, I was thinking about everything I had been thinking about and wondered…do people find me annoying because I’m so curious, because I ask a lot of questions…and I don’t need ANYONE to say..No, Nina…that is not why we find you annoying.

..and then I wonder how much better off I am today due to privacy laws.  I’m a 50 something hick in smalltown Iowa and have tried to handle my mother and my aunts death and estate problems.  I couldn’t even cancel the damn cable and Direct TV accounts without sending them a copy of the death certificate…you’ve gotta be kidding me.  The phone company didn’t have a problem..but the cable company..There should be some healthy privacy rules to protect us…but the cable company.  I basically said…fine..she has no money, she has no estate..I’m offering to pay her last bill if you want to pencil in my address otherwise…she won’t be watching TV anymore and you won’t be receiving any money from her and they said NO..they had to have a death certificate..so…all you other cable subscribers out there just got screwed because you have to pay her last bill….

In going thru stuff last night – I thru out the girls clay art projects from elementary school…one is 28 and the other is 22…it’s probably time…but it was hard to do….

That’s all that is on my mind right now…I have to get back to ebay, people..it is calling.