I got to Debbie’s house yesterday about 2:30p and left there at 1:30a…we didn’t scrapbook the entire visit…we checked out mutual friends on  Facebook, ate a little, drank some wine, talked, ate a little…did some scrapbooking..ate a little… it was wonderful.

Debbie babysits for months at a time for her friend’s Kerry Blue terriers….friend, Jana is a breeder of Kerry Blues so they come to visit Aunt Debbie for a little one on one affection….Debbie also has a Chinese crested…I must say, freakishly cute dog 🙂  I decided yesterday that I’m going to call Debbie – Debbie – because that is what I’ve always called her…now that I am in my 50’s, I was feeling I should call her Deb the way everyone else does…but it takes thought not to return to teen habits – so I said what the heck…even though calling her Debbie…you know like..Debbie, I can’t get this..or Debbie, would you bring my Diet pepsi out of the fridge…makes me sound like I’m about 12 🙂

We are having quite a struggle with Benny and the roomba….he ran it last night, this morning, this afternoon and we have had to stop it 3 times in the last couple of hours…he is so smart he knows he has to hit the button twice for it to go…I had no idea cats could be this smart…. 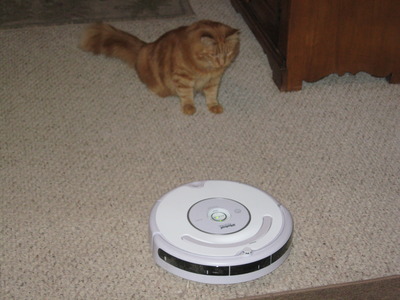 This is my last night off, I’m going to organize scrapbooking stuff…I ended up forgetting kitty stickers yesterday, then do a little crocheting, watch Y and R after he leaves and end my night with Dog the Bounty Hunter.

Hey everybody – ref the stockings.

The putting together pattern is what takes the time…just takes practice…They are very fun to make.  I don’t know what I’m going to do with all of them…I’m going to pick out my favorites for the family and give the rest of them away at Christmas, I guess…I’m having fun making them and can now play around with placement of different “circles”….

I’m off for a haircut and scrapbooking 🙂

Ref yesterday’s rant…he’s not speaking to me…Since he’s gone to work, I’ve been drinking red wine and crocheting…I decided to take pics of the Christmas stockings I have made.  When I uploaded them, they were vertical but on xanga they are horizontal…but you’ll get the idea…. 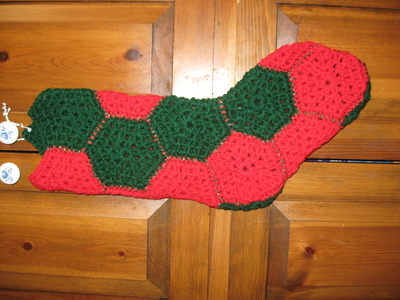 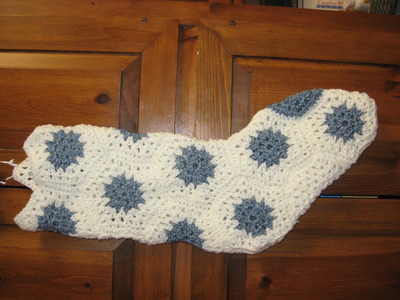 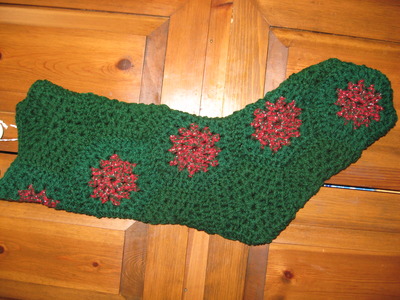 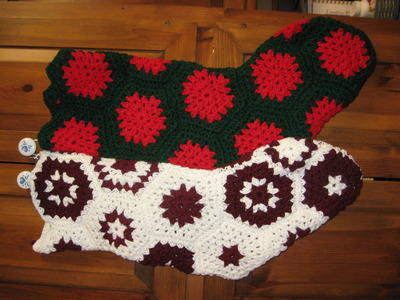 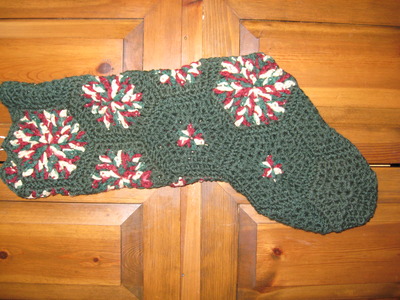 I need to perfect the foot part of the stocking…it is the only thing I don’t like about the pattern..I think I have it figured out..plus on Christmas morning when they are stuffed to the brim, will it really matter 🙂 I have one more to finish before I go to bed so I’m going back to watching The Dog Whisperer and my crocheting.

I’m thinking it is time to switch satellite companies again…I think our contract with Direct is up in June.  Seems there are always great offers for new customers but they never want to offer a “great” deal to current customers to keep their business…seems something wrong with that picture.  I need to get a DVR on the upstairs TV before “he” has to have the remote control surgically removed from his ass.   “He” is Lord and God over the TV…..I have decided that I am no longer going to “ask” if I can watch a TV show….WTF…if I can’t get out of our contract or if they won’t cut me a deal, I’m going to pay almost $250 so I can have a DVR on the upstairs TV…then he can watch whatever the hell he wants to watch and I won’t have to walk on egg shells when I have to “ask” if I can watch something that interests me… he can take his big bully mentality and enjoy it all by himself.

Avis, “his” mother gets out of the nursing home today.  She will have to have home speech therapy but I’m guessing she will be glad to be freed… his brother will be staying there with her…not sure what the ulterior motive is there but then again…I don’t really care as long as I don’t have to deal with them.

Miss Minnie seems to be settling in pretty well…she’s now hanging around downstairs with us and all of the critters..she still has a bit of fear when humans walk toward her but there has been definate improvement.  They had a cat nip treat today…I love to watch them…just wish I knew what the cat nip made them feel like and then I wish that there was legal cat nip for me…

I am so looking forward to scrapbooking with Karen and Deb on Thurday.  I enjoy our time together and that is where I am finding my “happy” time.

The first Animal Rescue League auction is under our belt…it went okay..we learned some things, made some money and will be talking about it tonight at the monthly arl board meeting…

…and while I”m being a bitch, anyone else afraid the twins are gonna jump out of there and hurt someone? 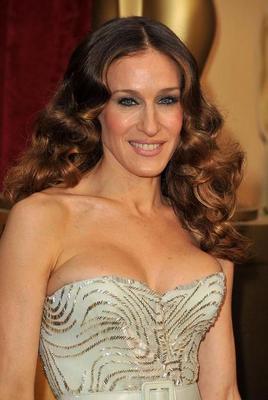 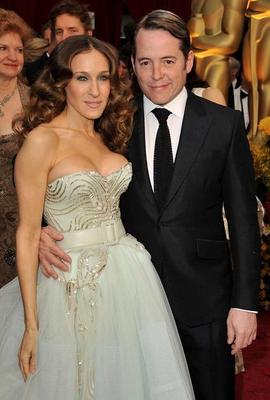 Nothing much to blog about…

Animal Rescue League fundraiser this weekend….and then it will be over

Back to work tonight…

I think Minnie is finding her way around…she’s more of a scaredy cat than any of the other ones…it could be because Baxter follows her around and grunts…similar to a dump truck following your VW honking…by the way, here is a pic of the big lug in his new sleeping place…this makes no sense to me but it must be comfortable to him??? 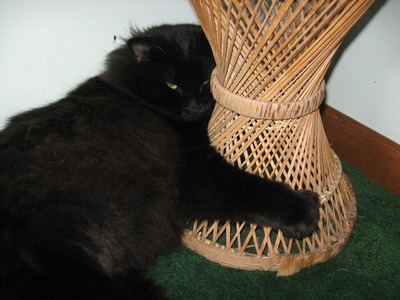 Benny followed her around yesterday and was actually trying to groom her pretty early on…probably trying to get the ARL smell out of her.  Here’s Benny’s sleeping place…he now naps during the day with his new best friend 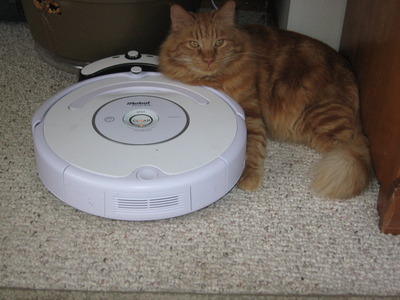 “His” bro came for supper last night…he has been all over…most recently spent a month or so in Albania…I asked the same question…I think he was just curious…when he was in the air force, he monitored Albanian radios and knows the language…he is something of a foreign traveler and seems to have an incredible wonderlust…

Sierra goes for a tooth cleaning today and I have to take her in… 😦  mama hates to take mama’s girl anyplace and have to leave her.

I worked on the basement yesterday…maybe I should take a picture …. just a sec…His 11th love after me, the girls, the dogs and the cats is carpentry…he always has piece of wood left over and they used to be stored here 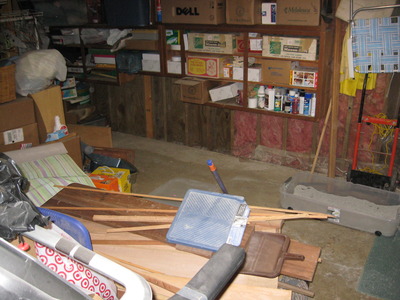 under these shelves…well, I thought I would organize so I could put some other things under the shelves like the litter boxes etc..so I cleaned the stuff out…by the way most of the boxes on those shelves have nothing in them..I’ve been saving them for when I do ebay….

I also cleaned out from under the stairs a multitude of stuff…like several dozen canning jars…all of my Painting stuff and all of the houseplant containers I’ve collected over the last 25 years.. 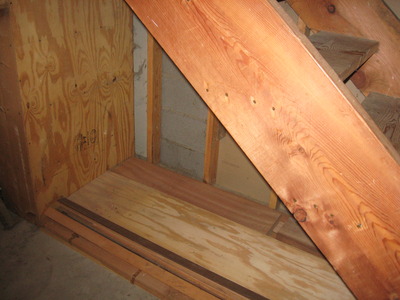 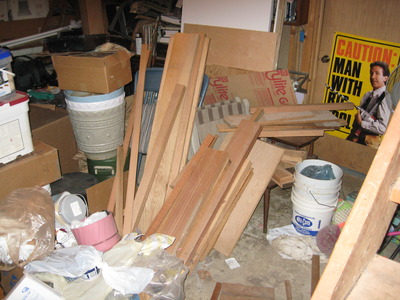 So…you see what I’m going to be doing this morning…..

Until next time or better said, if I get out of there alive…… 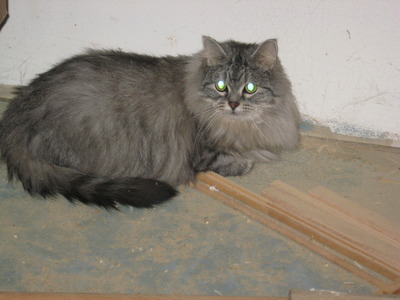 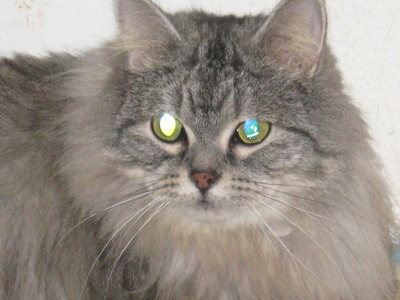 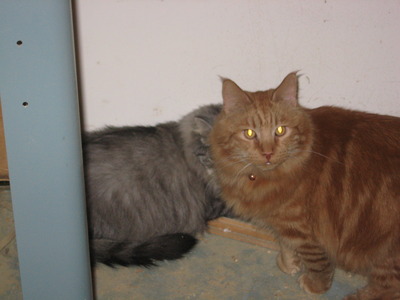