Relating to my last post about co-birthdays…today is a barn burner…several friends of mine have July 25th birthdays…when they popped up on FB this morning, I thought I should introduce them to each other… also the anniversary of my cousins, John and Patty Green which is also the birthday of their youngest son, Matt. I’ll bet that was a memorable anniversary celebration for them! He and I often laughed about how exciting we made our anniversaries…several of them were spent eating at Country Kitchen with our girls….instead of wine and dancing….I don’t regret a thing!

Went to Target yesterday to get Jax some building blocks…I was going to buy them the last time but thought that he may not be ready for them yet..but also thought it might be a way to learn his primary colors…Grandpa opened them up this morning: 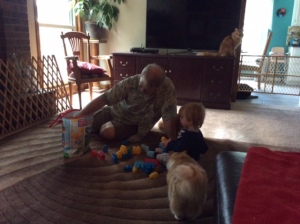 and was I wrong!!!! Sometimes I feel like a bad mother because I don’t remember milestones of my girls. It’s a whole new learning experience being a grandma and enjoying the details of his wonderment…much different than being a parent. Different distractions and a lot less stress!

He is working on creating a new living area in the basement *ahem craft room. I’m very excited to get everything organized so I don’t have to make a plan and find what I need in order to craft. I put together a games wall in the hallway over the last couple of weeks..finished it last night.. 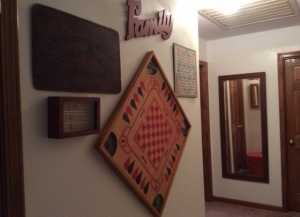 I spent way too many years being too busy to create.

It’s going to be a hot one today…I told him I was going to go out and water flowers…but got sidetracked…Tonight is Friday auction night at the Ice House Auction house. Enjoying the day…