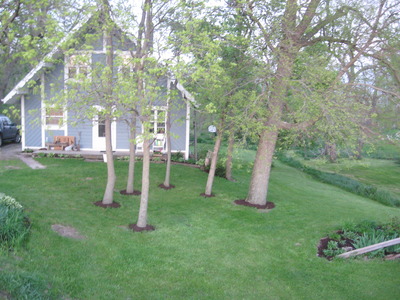 We have this nice little house in the country…this is where we have lived our life since 1986..we raised our family in this house and were quite content.  Then when mom passed in 09, we remodeled and moved next door and decided to rent out the old house…feeling that we would still have some control over how the place would look and how it would be taken care of.  HAHAHAHA

The guy who fell in love with the place and had all kinds of dreams about he and the 18 year old daughter living there and eventually bringing his mother from Kansas – they loved it, ahhhh they will be so happy.  Oh *$%^ someone please slap me back into reality.

Everything was great in the beginning..I really thought it would work out…then the other daughter’s boyfriend loses his job and they also move into the house…everything is ok…then the original 18 year old daughter moves back with her mother because she can’t get along with the boyfriend-in-law…everything is okay – rent is slipping but at least it is getting paid in the month it is due..the tenant also lost his job but somehow is coming up with the money…then that job is gone..I gave them an out of the lease because I know you can’t get blood out of a turnip…he didn’t want out of the lease because the daughter and boyfriend-in-law were going to get married in the backyard and invitations had already gone out…I understood that…they started cleaning up around the house – the wedding was held…rent even later…now son-in-law with a partial job sitting in the backyard with the family, smoking marlboros and drinking beer and SETTING OFF FIRECRACKERS…OH PLEASE DON’T CALL THE LAW, JUST WENT TO MISSOURI AND GOT FIREWORKS..you have got to be kidding me..talk to tenant he says the kids are barely making ends meet and buying food..she’s pregnant you know..but I told them they are going to have to help with expenses…(ya right).

Tenant is on the road all of the time but when he is back for a couple of days we make arrangements for two months rent to be paid in 3 installments…tenant has a new job and is driving as much as the DOT will allow.  he is gone all the time and the dead beat son in law and his wife and children living in the house…more shit in the front yard…new baby is here…doesn’t appear anyone is working except the enabling tenant/father….trash in the ditch from a broken garbage bag for 2 weeks..3 weeks…4 weeks.  First check cleared – second check didn’t clear for 2 weeks and 2 days, 3rd check not even a question…tata tenant…done..no more – get the H out!!!  especially good riddance to the lazy, dirt bag son – in -law…had he had a little self respect, things might have worked…feel sorry for the daughter/wife and kids – they are twirling in the drain and don’t even know it…or do they?

2 thoughts on “It just makes no sense…”