So…the funniest story of the day that I totally forgot to share.  “He” was opening his gifts and opens the gift of a sweatshirt: 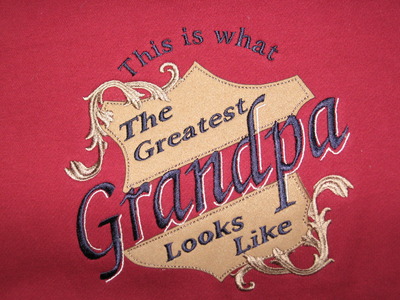 Keep in mind…we don’t have grandchildren 🙂  You probably know where this is going…anyway….he pauses..I look over at him and he is giving me the wierdest look…then he looks at Carl and Jane and Jenny looks around to see what it says…total silence in the room and then Jane says – CARL…DID YOU PICK UP THE WRONG SWEATSHIRT – IT IS SUPPOSED TO SAY GOLFER.  It took a minute while everyone caught their breath….  The thoughts going thru my head …. suprised that Jenny could keep a secret and then I was surprised that they wouldn’t tell us all together and then I was surprised that the potential grandpa, Carl would get the potential grandpa, Phil a “greatest” grandpa sweatshirt……After the release of tension in the air and the kids assured us that there were no grandchildren in our near future we laughed and laughed….

3 thoughts on “Tension in the air”