To be totally honest…that is what we said prior to the feast at Bare Bones BBQ tonight.  When entering the back seat of the Fiat, you must pay attention and not just squeeze inside in a hurry…not even if you are in a hurry to save your life because you must be cognizant of the fact that you must exit the vehicle ducked and bent over in exactly the same manner as  you entered the vehicle….and one would never want to be in the back of the Fiat with anyone occupying the front seat that you don’t trust with your life!  It would be virtually impossible to escape without the front seat occupants assistance.  Period.

My loyal partner of 36 years has been a faithful mate!  If a woman on the street catches his eye, I would not know it…he’s just one of those guys.

Until FOR CRYING OUT LOUD tonight.  It was my idea for us to hit the ice cream shop after dinner…he’s driving and we pull up in front of the ice cream shop…two female employees are sitting outside…he gets out of the car, slams the door and makes his way to the door of the shop (I believe I hear giggle giggle but it could have been the heat rushing from my ears) before he realizes that he has locked his wife in the back seat…the him-in-law was just standing outside his car door  waiting to assist his future bride out.  I was pretty sure that him in law was also wondering WTH his brother was doing.  He may or may not have heard my expletive about his brother totally forgetting his wife when he sees a couple of other women.  Needless to say, the embarrassed man who locked his wife in the backseat of the car bought ice cream for four.  And thus begins our week long foursome vacation.

It must have infected me when I was a child and the week or week and a half vacation we took every year.  I often wonder what thought process went into my parents planning the trips.  We went every direction…I will say that my mom was more adventurous than my dad…I say this because after a day of traveling,my dad was usually spent and he had no desire to explore….he wanted to plan the destinations and go from point A to B…no side trips along the way just to see where the road ended up.  I think I would have had more fun if I hadn’t been an only child….I’ll never know!  I remember the often bad vibes on vacation too.  I’ll never forget backing out of the driveway on our way to Florida and before my dad could put the car in drive from reverse, my mom said she wasn’t going anywhere until he put his seatbelt on…he finally agreed but I’ll never forget the fear and overwhelming disappointment I felt sitting there in the street…sad…because I didn’t think either one of them would give in.  I remember my dad dropping his pajama bottoms in the toilet when we were in Arkansas….my modest father…it seems wrong that the event is glued in my mind 49 years later…but it was a major event!  OMG what should we do?  the good memories do outweigh the bad memories and I feel that it was probably those events which taught me to problem solve and that with a map, the world was my oyster in search of my pearl!

He and I are restless today….it’s raining and it’s Labor Day.  I pulled up The map on my computer….where can we go?  When looking at the map…everything looks close and everything is a possibility.  The freedom to explore, seeing things I haven’t seen before, breathing in scented air I haven’t breathed before, the adventure…yes…I love an adventure.  traveling and exploring is the frosting on my cake.

We are staying home today…rain, humidity, holiday crowds.  But who knows about tomorrow!

We stayed at the Radisson St George Hotel the first night.  It was cautioned that the neighborhood was not a safe place to be at night – especially for tourists who have a tendency to wander because they just want to know where “this” road goes.

Before we headed off to Corozal, we took a foot tour of Belize City near the water in the downtown area.  I can’t say that I didn’t feel safe but I just didn’t trust anyone who tried to get my attention.  Anything can be had for a price.

This was in the center of town…every city loses someone(s) in the war.

Roads between Belize City and Corozol were quite bumpy…no shoulders … lots of blemishes and lots of Pedestrian crossings which are not marked well and can be anything from a crude little bump in the middle of the street to a well formed piece of asphalt.  The Nissan Pathfinder we rented had very bad shocks which was totally understandable due to the rough roads.  The two hour drive in the car was not pleasant!

I see Belize as a very poor country.  As usual, we didn’t hit the tourist spots, we wanted to see the inside and outside of the country.  I can only speak to the areas we were in but it is not a place where expats can move to and expect their way of life to continue. Traveling north from Corozol about 7 miles is the crossover into Mexico which the entry city is touted as the shopping mecca with a Walmart and cheaper gas.  We didn’t cross the border.

Snapped a couple of pictures of the larger houses in Corozol downtown area.

We stayed at the Sea Breeze Hotel…budget hotel.  Cheap and clean was all I could ask for…and it was for the  most part.  Most nights we ate around the corner at the Copper Horse Inn.  The Canadian who ran the Copper Horse Inn provided great meals and great sass!

The Belize City airport is very nice.  This isn’t the first time we have visited a country where you boarded from the Tarmac…but it’s a totally different feeling than what we are accustomed to in the states.

I know that most of my trip was seen thru diverticulitis eyes….the unknown and lack of amenities I’m accustomed to certainly took away from the joy of my visit.  IF I were to go back, I would definitely do the tourist stuff and forego my curiosity of the Belizian culture…but I probably won’t go back.  Too many other places waiting to be explored. 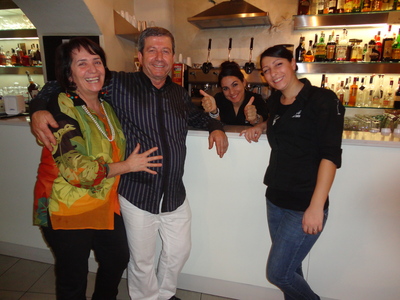 Traveling across the pond to another country brings with it some mild anxiety of the unknown…until of course, you find your soft place to land. 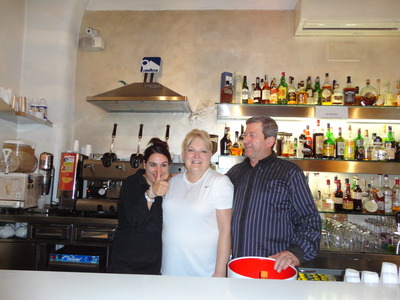 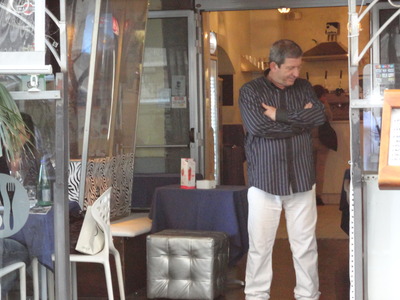 Look at our room…. 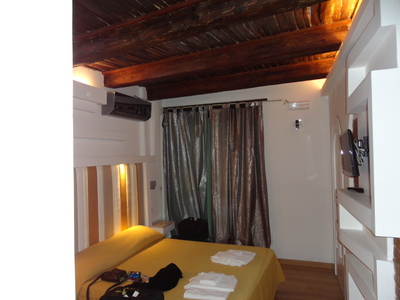 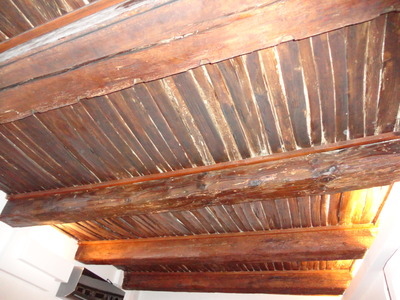 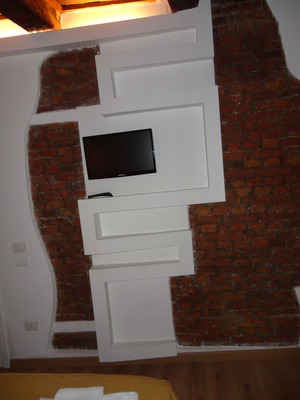 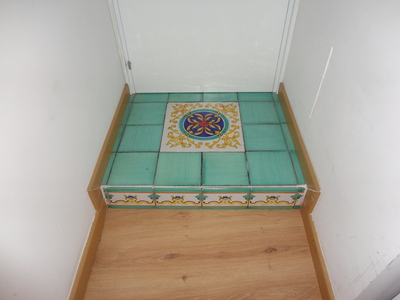 The bathroom and shower 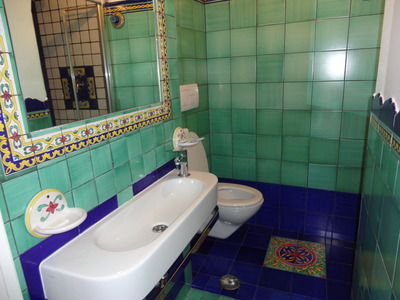 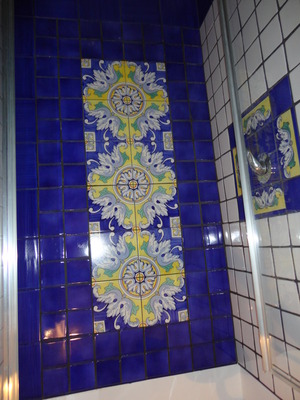 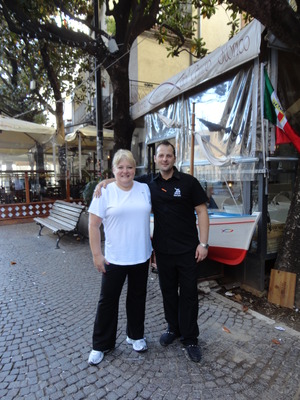 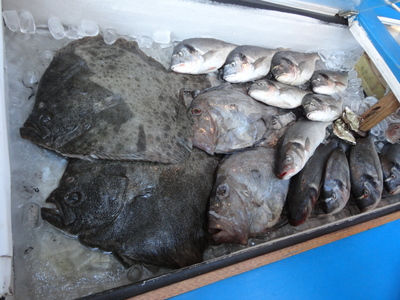 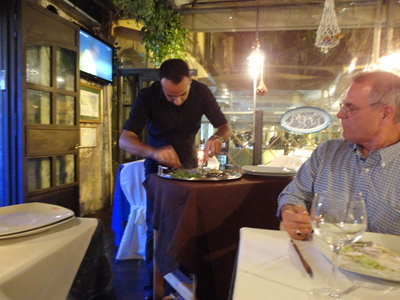 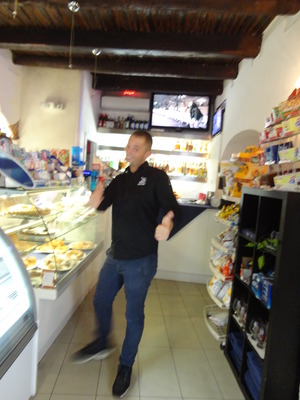 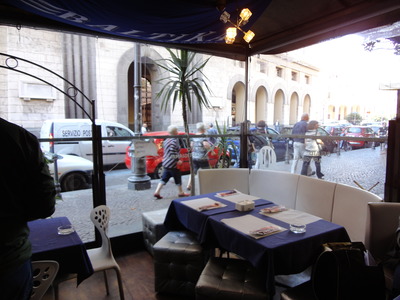 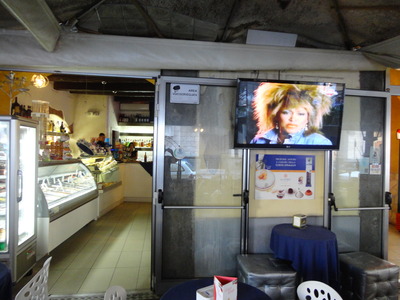 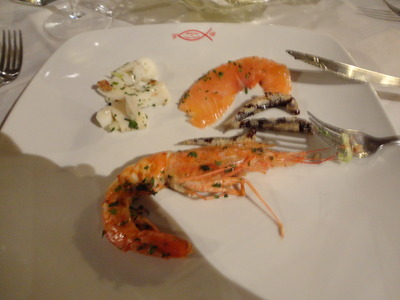 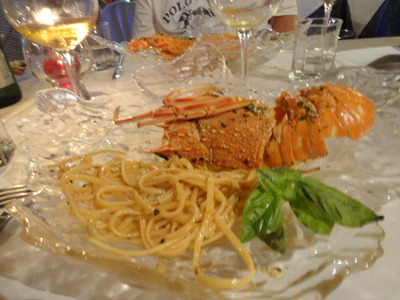 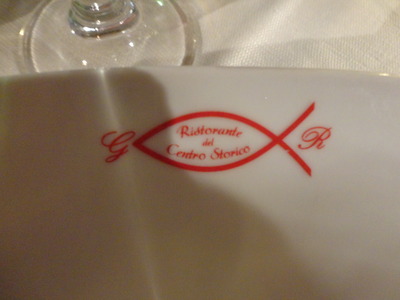 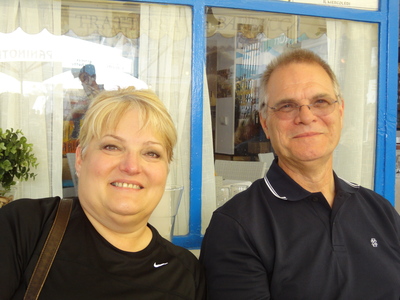 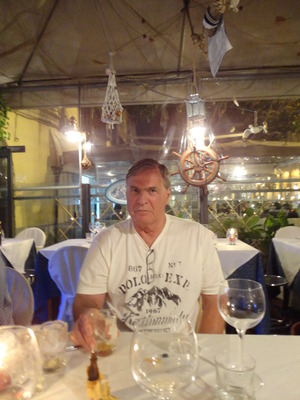 If you ever find yourself in Solerno, Italy, this is the place to stay!