As life goes….as I’ve learned in therapy….as I’ve uncovered in myself as I embrace new thought, my life as far back as I can remember has been guided by fear!

Over the years, I’ve done some brave and, what some might call, crazy or fearless things which I would say do not meld (for lack of better word) with the belief that I am guided by fear. I think in a subconscious way, I embrace these challenges in order to work through my fear but I’m positive this insight did not knowingly have a bearing on my decisions at the time.

I do not swim very well, in fact I’ve never known if I knew how to swim well enough to save myself….and quite frankly I have a fear of the water….no doubt thanks to my mother who feared everything. Keeping that in mind, I have an incredible desire to be in a boat on the water…we’ve owned a pontoon and two sailboats and now kayaks.

Last weekend for the first time, we took them to the River…the Niangua….for a a maiden 4 hour ….cue Gillians Island music….River voyage. Before I actually got completely on the River, I was personally completely in the river. Within the first hour we had to go around a sand bar where two guys were fishing and because of swirling water and Lack of experience, I got too close to the steep bank and turned it over again! Once I recovered and was helped back in by said fishermen, we were off again.

It was fun, I learned technique, I relaxed, I felt the sun on my body, i experienced the beauty of nature a way I had never seen it before. But the one thing that sticks in my mind was when, as we were floating down the river, he yelled back and said…so did that experience scare you? NO. It did not scare me. I would like to figure out why it didn’t.

Bless DKW1965’s heart.  She sent me to google images and there were a few more pictures of  Regina Lasko – Dave’s girlfriend-wife.  She looks normal!!

tlm0000 – these are my trout dishes.  I just happen to have a problem with my love for dishes but there are no support groups in my area.  Everytime we went fishing at Bennett Spring, I eyed these trout dishes in the park store.  Toward the end of the season, they came down in price – to about 1/2 of the original price and on the last day of that particular year, he said…Okay…why don’t you get them … yippee.  Someone came out a few months after that and asked me if I got them in the LTD Commodities catalog….grrrrr they were 1/2 the price I paid!!!!  I love them – they are worth the price I paid for them 🙂 There are four different trout pics. 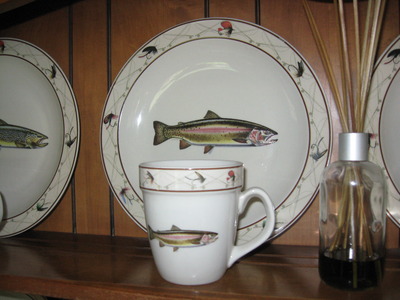 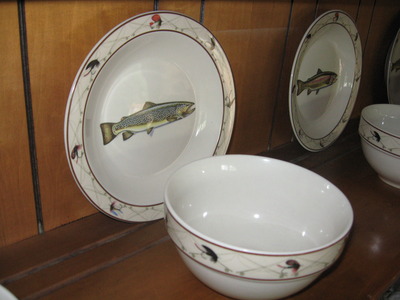 Here’s a couple of pics of what “he” has been doing on his days off…. 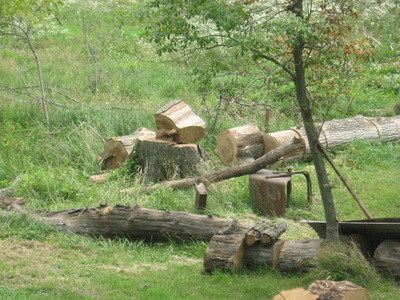 He took down 3 dead trees…this is the stump that still needs to be burned out…this is what is left of the other two.  We first set them on fire Sunday night. 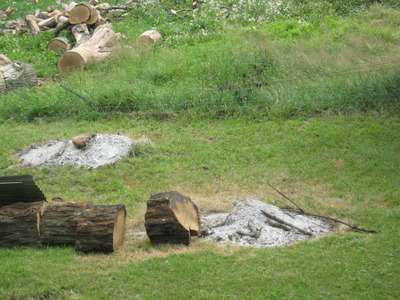 I’m planning to replace them with a weeping willow tree.  The weather was wonderful Sunday night for enjoying the fires – but since it has been hot and humid.  I enjoyed the fires last night from the comfort of my air conditioned computer room 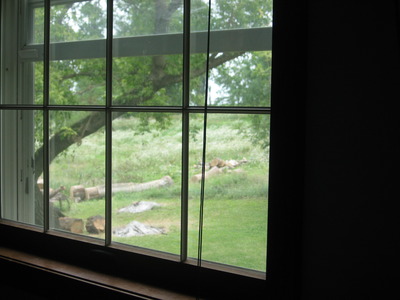 Haircut and color at 6:45…life is good