I could go back and look, but I’m pretty sure I started my Xanga life  in 2007 thanks to my good friend, Jeff – aka The Ground Hog over on blogger.  He started blogging and I got into it…The Blogger site fit him better so he moved over there..but I had already made a couple of contacts on Xanga and decided I was happy here.  When I think about how many people there are blogging at Xanga, I’m overwhelmed with the fact the stars were alligned or there was some kind of cosmic connection or maybe I had earned good Karma?  Whatever the reason, I found Tracy and really liked her…While visiting Tracy, I also became interested in some of her “friends” including her sister, Erin and Skanickadee.

To even make this story wierder..is that a word…well, it is right now…Tracy’s work brought her to Newton, Iowa and we met in person.  It was scary awesome.  She came back for work a year later and brought her husband so I got to know that Tracy…then we decided we probably needed to meet up together with Skanickadee and Erin…that was 3 years ago.  We met for a weekend in Chicago – it obviously was a very good weekend because we did it again just this past weekend.  I must say that being there for each other thru thick and thin for the last 3 years made this visit more relaxed…we like each other…we trust each other…we are friends forever! 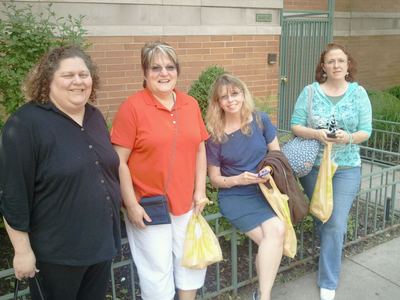 I’ve come to the conclusion that we know each other very well…it was funny when we would get to talking and one of us would say – oh ya..you did this or that…just as we would if we were traditional friends with history.  Also…we are gut level friends..we aren’t hung up on the physical things about each other that really don’t mean squat.  We aren’t hung up on style, how we wear our hair, whether we think one of us should have a tattoo…whether one of us (me) can’t find her way out of a paper sack…we like each other for who we are.  It feels really, really good!!